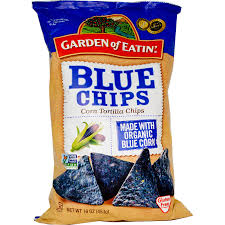 Chip bags have all that air in them for a valid reason — and it’s not air, anyway, it’s nitrogen gas.

So what is this gas doing in your bag of crisps? First, the gas acts as a preservative so your chips are as crispy when you open the bag as the day they were packaged. Next, the gas also gives the chips a cushion. In what’s known as slack fill, chips manufacturers intentionally inflate the package with nitrogen gas to protect it from damage in transit. Without the cushion of nitrogen gas, chips would likely wind up at their final destination as a bag of crumbs, because the chips inside the bag would break through being stacked in transit or packed onto a grocery store shelf.

Nitrogen gas is piped into the chip bag before packaging. The gas displaces oxygen from the bag, which is then filled with chips and sealed. Without this step, chips would have a much shorter shelf life. Oxygen in the bag would cause the chips to stale and humidity found in air would lead to soggy crisps — no signature crunch.

While nitrogen gas does play an important role in keeping chips fresh and full-sized, there is a danger in using this gas. Not to the chips — since nitrogen lacks odor, color, and flavor—but to the employees in the processing plant. Nitrogen preserves the chips’ texture because it displaces oxygen. If nitrogen leaks in the packaging facility, it will displace ambient oxygen — eventually causing levels to fall so low they threaten employee health.

Workers become confused and dizzy when they breathe air that lacks sufficient oxygen. Oxygen-deficient air also causes respiratory problems and can lead to death via asphyxiation.

The same properties that made nitrogen a good choice for preservation — lack of color, odor, and taste — mean employees cannot detect a leak until it is too late.

Fortunately, there’s a simple and reliable way to make sure food packaging facilities aren’t leaking nitrogen: Using oxygen sensors to measure the amount of oxygen in the air.

An oxygen monitor tracks oxygen levels in the facility, which should be stable as long as there is no gas leak. Since nitrogen gas displaces oxygen, oxygen levels will fall in the event that nitrogen starts to leak. When oxygen levels fall below safe thresholds — which are defined by OSHA as 19.5 percent — the oxygen monitor will sound an alarm. Employees will be able to leave the packaging floor and alert emergency personnel before the situation turns deadly.

For peace of mind, employees can check the levels of ambient oxygen by looking at the face of the monitor. A silent monitor — with no loud alarms or flashing lights — indicates that all is well. Lights and loud noises mean staff should stop what they are doing and vacate immediately.

To properly protect employees, one oxygen deficiency monitor should be installed in any room where nitrogen gas is used or stored. Facilities that use nitrogen generators to produce nitrogen on demand also need an oxygen sensor near the generator.

PureAire’s oxygen deficiency monitors are a cost-effective long-term solution to nitrogen leaks in food packaging plants. These monitors provide accurate readouts even when temperatures are as low as -40 Celsius, and operate reliably even in confined spaces, including freezers and basements.

PureAire’s monitors feature a zirconium sensor, which requires no maintenance and no calibration after installation. PureAire’s O2 monitors provide consistent readouts regardless of the weather or barometric pressure, which makes them reliable solutions for safety-minded employers.